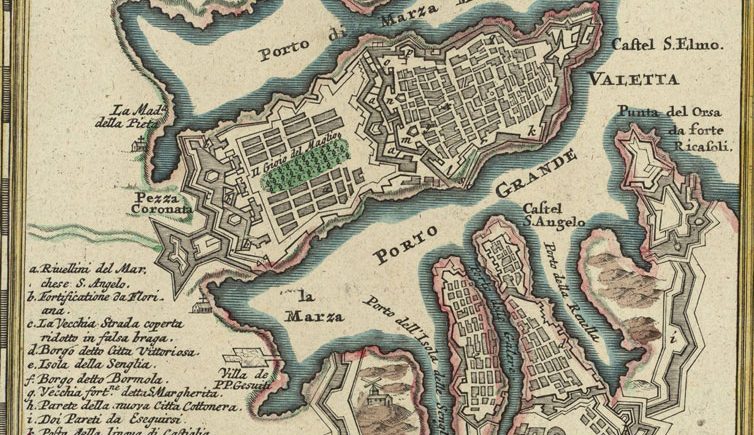 Malta Fior del Mondo, Malta the world’s most precious flower for its almost legendary beauty. Built within a decade, Valletta was a synthesis of Renaissance urban theories on the ideal city and modern military engineering. It such an impressive architectural masterpiece that travellers often reported the impression of its divine rather than human origin.

Three primary categories of foreigners migrate to Malta: aristocrats, merchants, and skilled maritime workers. For second-born members of the European aristocracy, the Order of Saint John of Jerusalem constituted a prestigious career opportunity. For European merchants, the high quality of the Maltese bills of health and the central position of the island were both seen as extremely convenient. And, lastly, for specialised maritime workers from all over the Mediterranean, Valletta offered numerous job opportunities thanks to Malta’s main economic resource: corsair activity.

Maltese society is entirely dependent on foreigners and a characteristic trend of Maltese migration was that the majority of the migrants were men, who mainly moved there on an individual basis and not following the logic of diasporas.

However, the expression of a visible diversity in Malta occurred only at the two extremes of the social scale there, that is, for the knights of the Order of Saint John of Jerusalem and Muslim slaves. In Valletta, the acculturation process principally involved the lower strata of migrants, who moved to Malta individually and entered a comprehensive Maltese lifestyle that could easily integrate foreigners (Cassar 2009), displaying a kind of cosmopolitism of assimilation according to which to become Maltese it was necessary merely to marry a Maltese woman (Mercieca 2000) and to be a Catholic (at least formally).

The ruling class of Malta – the knights of Saint John – usually remained tied to the lifestyle of their country of origin, proudly stressing their roots. In 1699, Jean Du Mont wrote: “Les Chevaliers vont vétus differemment à Malthe, les François à la Françoise, les Italiens à l’Italienne, et les Espagnols à l’Espagnole.”As for the knights’ way of eating, travellers invited to dine with various knights all reported the habit of preserving those of their own countries, dropping them only for options of a higher status. German knights were particularly famous for their heavy dishes, ill-suited to the Mediterranean climate. In their search for gastronomic luxuries, for example, the knights followed the habits of the European aristocracy and, at the end of seventeenth century, the Russian Piotr Tolstoj found that many of them had adopted French eating habits, probably due to the arrival of many chefs from France, as already documented by the French Bachelier in 1673. The possibility of eating in non-Maltese ways was granted not only by hiring fellow countrymen as chefs but also by the easy access to imported foreign food items. Some of those – such as Parmesan and Roquefort, as witnessed by the French traveller Roland de la Platière in the late-eighteenth century – were real luxuries, highlighting not only how crucial purchase power was in reproducing foreigners’ eating habits but also how strongly integrated the Maltese international maritime network was.

At the opposite end of the social hierarchy, the Muslim slaves of the bagnio needed to be recognisable, and therefore retained a high degree of visibility in the Maltese urban context – that is, they remained ‘very Arab’. In descriptions of the time, Muslims and Europeans converted to Islam were always identified through their way of dressing ‘in the way of the Turks’ – that is, with a tuft on the top of the head or a turban. However, they actively mingled with the Maltese population, as also attested to by the fact that many Maltese women practising prostitution often counted Muslim slaves among their clients or as lovers. Interestingly, there was no stigma attached to having a converted slave as a parent and Maltese slaves did not represent an endogamic group that reproduced itself. Indeed, Maltese people spoke an Arabic dialect, meaning that they could easily and effectively communicate with northern Africans. Slaves were left quite free to express their form of cultural piety; they had a mosque in the bagnio; and they could celebrate their religious festivities. As for their foodways, slaves were allowed to cook their own food. Ultimately, this meant that they influenced some Maltese eating habits themselves. In the eighteenth century, flatbread typical of northern Africa sold by slaves became extremely popular in Valletta, offering a wonderful example of inversed cultural penetration involving the most symbolic of foods

For further information about the project, please contact:
medroute.eu@gmail.com
and also write to Viviana Tagliaferri:
filovivi@gmail.com